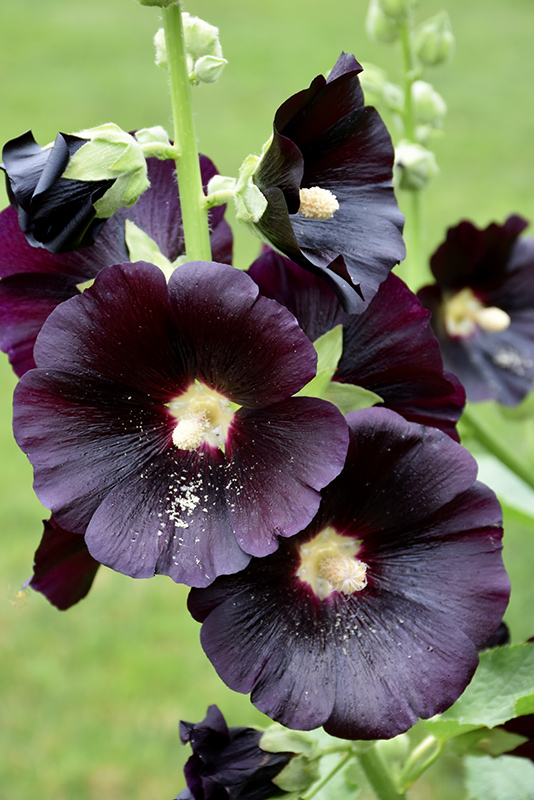 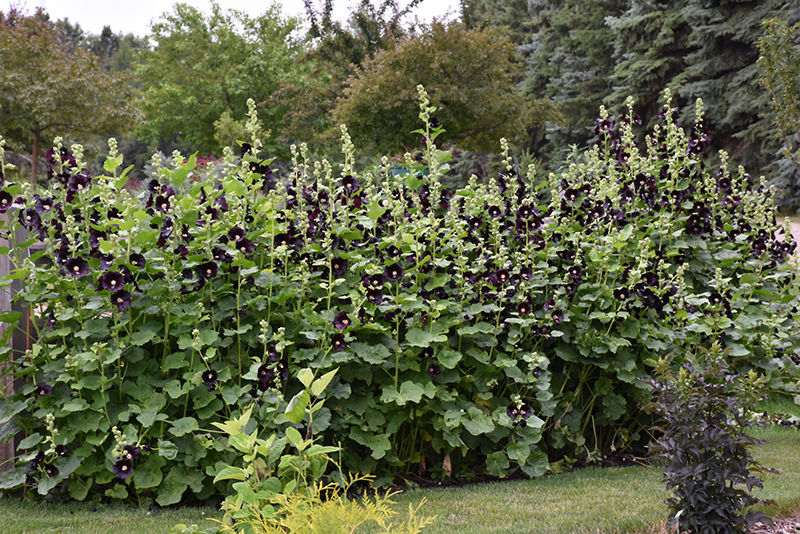 Featuring almost night-like dark purple-black flowers on towering spikes, this biennial is tolerant to the natural toxin formed by the roots of Black Walnut, but can be susceptible to Japanese beetles; plant in full sun for better growth

Black Hollyhock features bold spikes of black round flowers with white eyes rising above the foliage from mid to late summer. The flowers are excellent for cutting. Its large tomentose round leaves remain grayish green in color throughout the season.

Black Hollyhock is an herbaceous perennial with a rigidly upright and towering form. Its relatively coarse texture can be used to stand it apart from other garden plants with finer foliage.

This is a high maintenance plant that will require regular care and upkeep, and should only be pruned after flowering to avoid removing any of the current season's flowers. It is a good choice for attracting hummingbirds to your yard, but is not particularly attractive to deer who tend to leave it alone in favor of tastier treats. Gardeners should be aware of the following characteristic(s) that may warrant special consideration;

Black Hollyhock is recommended for the following landscape applications;

Black Hollyhock will grow to be about 4 feet tall at maturity extending to 6 feet tall with the flowers, with a spread of 24 inches. It tends to be leggy, with a typical clearance of 1 foot from the ground, and should be underplanted with lower-growing perennials. The flower stalks can be weak and so it may require staking in exposed sites or excessively rich soils. It grows at a fast rate, and tends to be biennial, meaning that it puts on vegetative growth the first year, flowers the second, and then dies. However, this species tends to self-seed and will thereby endure for years in the garden if allowed. As an herbaceous perennial, this plant will usually die back to the crown each winter, and will regrow from the base each spring. Be careful not to disturb the crown in late winter when it may not be readily seen!

This plant should only be grown in full sunlight. It prefers to grow in average to moist conditions, and shouldn't be allowed to dry out. It is not particular as to soil type or pH. It is highly tolerant of urban pollution and will even thrive in inner city environments. This is a selected variety of a species not originally from North America.